Platforms that do not spawn passengers have the phrase 'NoPx' at the end of their name – for example 'NS Platform Mid 8m NoPx'. These platforms do not create or support passengers and can be used for complex station areas where people are not needed.

The Track-to-platform offset and track-to-track offset for all platforms can be calculated using the calculator below: 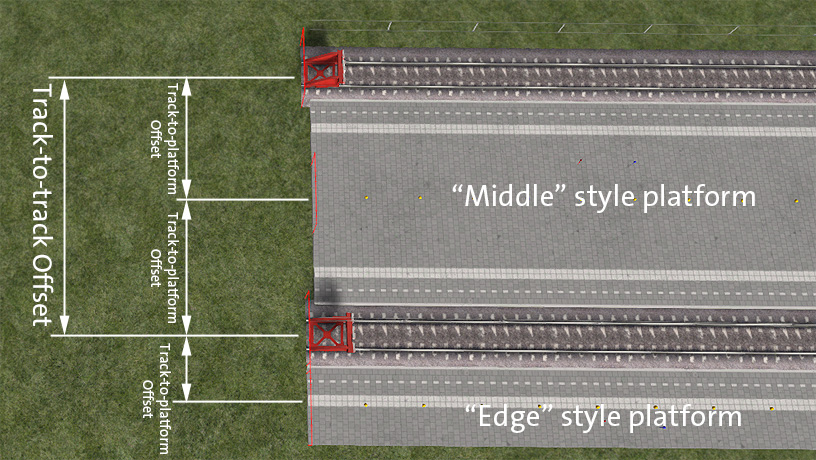 All Dutch platforms are prefixed with 'NS'. The different types are shown below. The one exception is the 'BE' platforms which are for Belgium.
For example the 'F2' platforms have names like 'NS Platform F2 Edge 4.75m'

Gaps between two 'edge' platforms that are back-to-back can be filled with 'filler' platform lofts:

In order for the passengers to be visible on the platforms you must enable the 'DTG Academy' assets in any route where you are using the platforms. In the route editor:

The pack also contains NS-style platform lamps as this is normally where the platform numbers are to be found. The naming convention for the lamp posts is based on the numbers of lights and speakers they have. For example:
NS Platform Lamp 1L 2S : 1L = 1 light 2S = 2 speakers
There are bright versions of all lamps. These have 'bright' at the end of the object name.
All the platform lamps are shown below:

Example of a complete lamp post with platform numbers

There is a plain station pole – the same type used for all the lights – but without any fixtures. It can be used to hang any other items, for example a station clock.

All clocks have hour, minute and second hands that read the correct time in the scenario.

This pack comes with station signboards that route-builders and scenario-builders can use by typing in their own station names. 'Scripted scenery objects'' do not work in TS20xx, so to get around this, the station signs are actually signals that do nothing (so they will not interfere with the signaling system of the game). This allows a script to be attached to the object, and the script is what allows the name of the station to by typed in by the user.
To use the station signs, make sure ChrisTrains objects are visible in the scenario editor.
The signs are in the 'miscellaneous' section. They are available in both the Route Editor as well as the Scenario Editor.
Click the 'miscellaneous' icon (1), then choose either (2) the 'NS Station Name Board' (which allows up to 17 characters) or 'NS Station Name Board Long' (which allows up to 25 characters):

Place the signboard (3) and then (because the game thinks this is a signal) place a single signal link on the track (4).
Once the sign is placed, you can name it. To do this, double click the sign (5) and in the properties on the right side of the screen, type in a name (6):

The name can use the characters A-Z, a-z, 0-9 and the hypen character ( - ). For a space, you must type '#'. In the example here, to get Den Haag Centraal on the sign, the name must be Den#Haag#Centraal.
Important note: in the Scenario Editor, the text on the sign will appear immediately. In the Route Editor, the sign will stay blank until you save the changes to the route and either go into the Scenario Editor, or play the game.

About the letters and spacing

For variable-width characters, in real life the distance between each character varies depending on the character. 'i' is very narrow and 'w' is very wide. (In typography, this is known as 'kerning'.) In TS20xx we do not have this luxury so every character is a fixed width. This means that some signs are going to look a little strange, especially where narrow and wide characters exist. This is a compromise of this object – to allow users to be able to type in their own sign names instead of having hundreds of objects (one for each station name). There is no workaround for this.
The picture below shows the difference. Variable width (kerned) font on the left, and the limitation of how it appears on these signs in the game (right):

The newer 2016-style NS signs (on the right) are available with '2016' after their name in the blueprint editor. For example 'NS Station Name Board 2016':

Versions with 'Wall' in the name are designed to be placed on building walls as they have no legs: For example 'NS Station Name Board Wall':

'Classic' name boards and signs for buildings are available with 'old' in their name. For example 'NS Station Name Board Old' and 'NS Station Sign Old'.
THESE SIGNS WORK BEST WITH ALL-CAPS LETTERS.

Placing buffers at the end of a line

There is a fictional assembly hall called 'CT NS Assembly Hall' and some matching doors that can be used to create a service / assembly facility.
To use this object, first place the main assembly hall, then lay some sleeperless tracks through the hall.
Next, place the door objects.
The doors are in the 'misc' items list. The doors are separate scripted objects that will open and close automatically as a train approaches them. The doors MUST be placed with both the door and the track links facing the OUTSIDE of the building. The primary track link (0) must be outside the building. The second track link (1) must be inside the building.
There is a marker underneath the ground that shows the correct orientation for the doors and track links.
Finally a 'Tunnel Hole Decal' should be used to cut a hole in the ground so that the service pits inside the hall show up correctly. This decal can be found in the standard 'tunnels' list. Place it around the outside of the assembly hall to correctly cut the hole in the ground.
All these steps are shown in the images below.

ETCS balises are in-track devices that can force a change in the ETCS system in a properly-equipped train.
For route-builders and scenario-builders, 7 eurobalise objects have been provided as scenery items.
Be aware that these objects were originally part of the Traxx 186 train so they can be found in the ChrisTrains->NS Class 186 object list:

The eurobalises all look the same but each has a different function. Above the surface, they all look like this:

In the scenario or route editor modes, an underground ‘tag’ is visible, which looks like this:

It is important to understand that these balises send 'force-override' signals to the passing train. This means that no matter what mode a player might have been using previously the train will be forced into the new mode by crossing these balise objects.

ATB 'bakens' are in-track devices that can force an ATB system on or off in a properly-equipped train.
For route-builders and scenario-builders, 4 ATB ‘baken’ objects have been provided as scenery items.
The CT ATB 'bakens' will appear in the 'track infrastructure' area of the objects menu.
The 'bakens' all look the same but each has a different function. Above the surface, they all look like this:

In the scenario or route editor modes, an underground ‘tag’ is visible, which looks like this:

It is important to understand that these 'bakens' send 'force-override' signals to the passing train. This means that no matter what mode a player might have been using previously the train will be forced into the new mode by crossing these 'baken' objects.